COVID-19 MESSAGE: We are Accepting New Residents and Allowing Visitors and Tours Please Click for Details.

Your Social Media Savvy Senior: Cause for Celebration and Caution 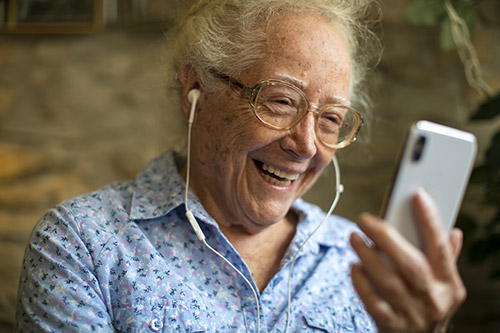 Today we dedicate our discussion to those of you wondering if the senior loved ones under you care are safely served by being online and active in social media circles. For reasons you can likely conclude on your own, your concerns for your loved one who requires memory care support is much greater than those receiving senior assisted living support. Regardless of the type of care you provide, all of us here who deliver professional assisted living and memory care support services understand, respect, and value the quality of life enhancing results that healthy online living delivers. So let’s get to it.

Ten years ago, few people would have predicted that seniors would become some of social media’s most passionate users. But a study last year by Pew Research Center found that 62% of online seniors are on Facebook. Other studies show that social media use among seniors is rising at a rapid rate. As more and more seniors use social media, there are growing concerns. With that said, most research indicates that social media improves quality of life for elderly adults. But some senior care professionals are increasingly worried about the dangers that social media could pose to seniors’ well-being.

Is Social Media Good or Bad for Seniors?

On the whole, social media seems to have a positive effect on seniors’ well-being. Internet use has been shown to reduce seniors’ risk of depression by as much as 33%. One study found that seniors who use Facebook show marked improvements in cognitive function. Another study found similar results when seniors were trained to use email, Skype, and Facebook.

Social media also opens new avenues for seniors separated from children and grandchildren by long distances. Facebook makes it easy to keep in touch with family members. Video-calling is particularly popular with seniors, who use services like Skype to connect with their grandchildren.

So why are some people concerned about the dangers of social media for elderly well-being?

Social Media and Depression in Seniors

One common concern is that social media could, over time, make seniors more depressed. When researchers have surveyed social media users of all ages, they’ve found instances where social media use is linked with higher risk of depression. However, this concern might be overblown among the elderly — after all, research has found that online seniors are less depressed than others.

A much bigger concern is how social media affects seniors’ in-person interactions. Senior isolation is a serious problem among the elderly, one with devastating health effects. Social media use can alleviate some of these effects, but it’s not enough. Seniors need to regularly spend time in the physical presence of others to avoid the emotional, mental, and physical effects of senior isolation.

Ultimately, social media is a positive tool for seniors, families, and senior care providers. But it’s something that should be approached with a degree of caution. If social media is your loved one’s main avenue for social interaction, or if you’ve noticed they’re spending less time with others now that they’re on Facebook, it may be time to consider a change.

Spending more time with your loved one is always a welcome solution. But it might not be enough. If you live far away or have a busy schedule, frequent visits aren’t always practical. When it’s time for you to seek help from a team of proven senior living or memory care professionals in and around Canton, we’re there for you. Always.