COVID-19 MESSAGE: We are Accepting New Residents and Allowing Visitors and Tours Please Click for Details.
January Move-In Special! Get $5000 worth of saving for the year. Click here to learn more!

New hope for patients with Alzheimer's: How one family is fighting the disease 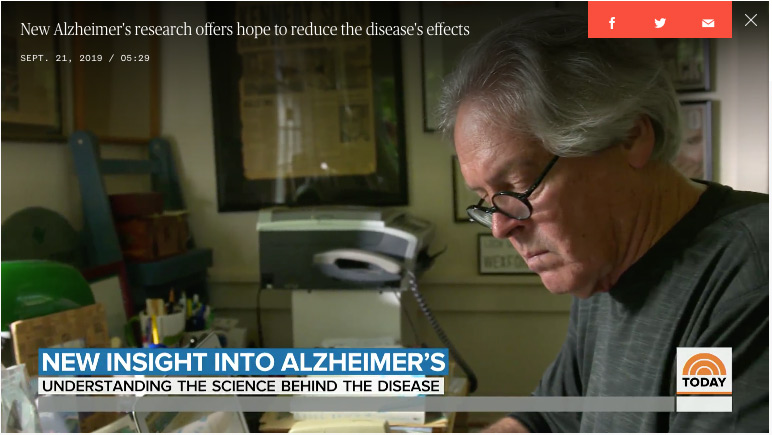 Like his mother Virginia O'Brien before him, Greg O’Brien is battling Alzheimer’s disease with all his might.

O'Brien's mother did everything she could to stave off the disease as she cared for her cancer-stricken, wheelchair-bound husband. And she did somehow manage to keep things going until her husband, O'Brien's father, died from prostate cancer.

It was from watching his mother live with Alzheimer’s that allowed O'Brien to recognize the signs in himself and prompted him to see a neurologist at age 59. Brain scans that revealed he had Alzheimer’s, too. Shortly after his own diagnosis, both of his parents passed away.

“It’s not for me, it’s for the next generation,” O’Brien said of his daily fight against the disease, choking up. “It’s for my kids, my granddaughter. We've got to stop this demon.”

Currently, the Alzheimer’s Association estimates that there are 5.8 million Americans living with the disease and that the number will rise to 14 million by 2050.

As O’Brien waits for medical breakthroughs that might stop the mind-robbing disease, he’s made lifestyle changes that recent research suggests might at least slow Alzheimer’s down. He follows a Mediterranean diet and makes sure he gets enough sleep. He exercises regularly and writes every day to “reboot my brain.” 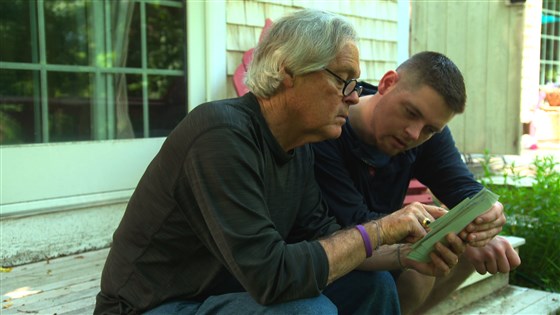 Can Alzheimer's be slowed?

To help make daily life run better, O’Brien, a journalist and writer for 45 years, leans on habits he honed in his profession. With short term memory frayed by the disease, “I write everything down,” O’Brien said. He started doing that because, “I worried I would forget.” 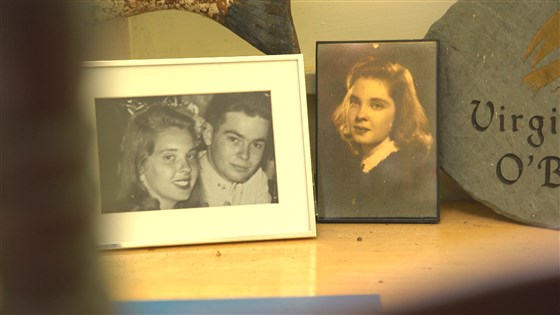 Greg O'Brien was the caregiver for his mother, Virginia, while she had Alzheimer's.Alexandra Galante/TODAY

O’Brien tries to stay mentally engaged and hopes that his years as a writer will help him in his battle against Alzheimer's progression. The idea is simple, using your brain builds and maintains connections, kind of like putting money in the bank that you can depend on later.

“Doctors tell me I’m working off what they call cognitive reserve, as my mother did,” O’Brien said.

While Alzheimer's runs in O'Brien's family, so does caregiving. Just as Virginia O'Brien cared for her husband, O'Brien's 30-year-old son, Conor, is his father’s caregiver. After graduating from college, the young man moved home to help his dad.

“I’ve always enjoyed spending time with him," Conor O'Brien said. "You just find a way every day to take it step by step.”

Conor says he doesn’t really see the progression in his father, but there are times that it really hits home. The day his dad didn’t recognize him “was the scariest moment of my life.”

O'Brien calls Conor his “rudder” because he steers him every day.

“We've got to bring this out of the closet so people can understand there are people still working who are scared [expletive] and are afraid to talk about it because they’ll lose their jobs,” he said. “We have to try to enable people to speak about the strategies, the medicines, the supplements.”

Still, O’Brien has had to accept limitations the disease has placed on his life. Two years ago he gave up driving.

“I have this ‘Where’s Waldo’ app that tells people where I am at all times,” he said. 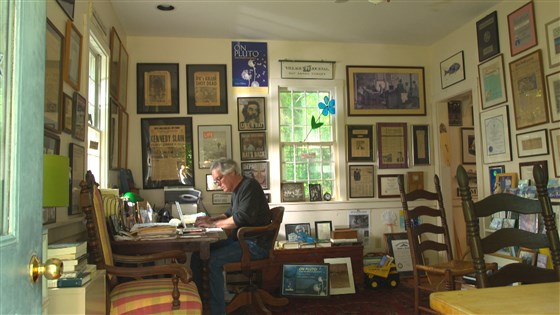 Greg calls his office his "memory room." Writing isn't easy for Greg, whose short term memory disappears after 30 seconds.
But making a record helps him to remember some things.Alexandra Galante/TODAY

“We don’t know yet if you can expand that to people with late onset disease,” Carrillo said.

And there is evidence from animal models of Alzheimer’s suggesting the disease course is modifiable and that living in an enriched environment can slow the progress of the disease, Carrillo said. O’Brien takes a lot of his cues from Massachusetts General neurologist Rudy Tanzi, an Alzheimer’s researcher who is looking to cure the disease. In the meantime, Tanzi has suggestions for slowing its progression — his program, called SHIELD.

Each letter of the acronym stands for a lifestyle modification that might impact the development of Alzheimer’s.

“It’s during deep sleep that you clean your brain of debris. Seven to eight hours of sleep a night is essential,” said Tanzi. 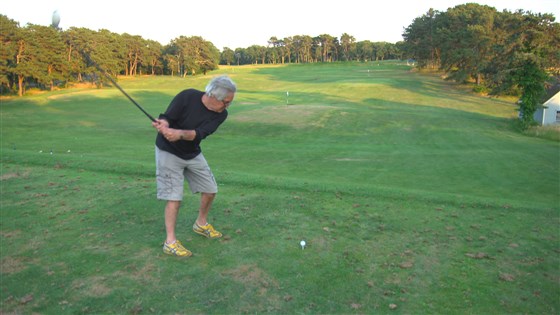 For physical exercise, Greg likes to play golf. He also goes for a run every day.Alexandra Galante/TODAY

‘H’ stands for handing stress.
‘I’ is for interacting with friends.
‘E’ is for exercise.
‘L’ is for learning new things.

Learning new things can help you make new synapses, Tanzi said. “The bottom line is in Alzheimer’s, the degree of dementia correlates most with the loss of synapses."

While O’Brien and his family acutely feel what he’s lost to the disease, they do see a silver lining.

“Alzheimer’s has kind of actually brought our family a little closer,” said Conor. “I would say that’s kind of a blessing in disguise.”

“I can’t step in my dad’s shoes and feel how he’s feeling,” Conor said. “I just look at him and he’s my hero.”